This is our story

We want to improve the quality of life of all our members with innovative financial solutions.

This is our story

We want to improve the quality of life of all our members with innovative financial solutions.

Home > Why Ariza > Our Story

Since 1947, Ariza Credit Union (formerly Grenada Public Service Credit Union) has provided products and services that have improved the quality of life and well-being of our members. We are proud to say that we’re one of the longest standing and most outstanding Credit Union in Grenada. But, all that success would not be possible without you, and when we go out into our communities and work together with our members, it reminds us why we are leaders in the Credit Union sector in Grenada.

We want to uphold the vision to maintain our role as a leader in being member focused, professional and innovative while collaborating with you. Our mission is simple – to improve the quality of life of all our members with financial solutions that have been tailored to their needs.

Each day we take great strides towards the future, to create a positive financial service environment we like to call the ‘Ariza Experience’. As an extension of the Ariza Credit Union brand, we invite you to spread the word and show the world that we aspire to rise above and achieve financial freedom for all our members, through co-operation, commitment and care.

In the year 1947 Credit Union literature was distributed to members of the Civil Service Association by the late Daisy Bryan, social welfare officer. In that same year the Grenada Public Service Co-operative Credit Union, then called the Civil Service Credit Union was established with a membership of twenty-one (21) persons and Share Capital of just under One Thousand ($1000.00) Dollars.

Sydney L. Cyrus succeeded A.D.W. Johnson as Treasurer and served in that position for a very long time. In fact, Mr. Cyrus can be regarded as the real father of the then Civil Service Credit Union who nurtured it with loving care in those early years. He was committed to the collection of funds from members which were deposited into the Government Savings Bank and from which withdrawals were made to effect payments to members.

At this time the need arose for assistance and Mr. Sean Alexander, who was a member of the Accounting Division of the Ministry of Finance at the time, was recruited by Mr. Cyrus to assist him in the co-ordination of the deductions from all Government Departments on a monthly basis and to prepare the required claim for submission to the Treasury and approval and payment.

Mr. Cyrus was succeeded by Mr. V.J.L. Buxo as Treasurer. Mr. Buxo was assisted by Mr. Joseph N. Bain who subsequently became Treasurer, a position which he maintained for twenty-seven (27) years.

The Business of the Public Service Co-operative Credit Union was at first conducted in Government owned premises but in 1974 as its independence grew a building on Tyrrell Street was rented to house its office. Two (2) staff members were employed – Ms. Marietta Mitchell as Officer in Charge and Ms. Jennifer Winsborrow as her assistant. The operations at the office were managed by the Treasurer, Mr. Bain who gave guidance and necessary assistance to Ms. Mitchell.

In June 1983, the Public Service Co-operative Credit Union appointed its first full time manager in the person of Seon Alexander who was at the time still responsible for the collection of member’s monthly deductions from all Government Departments. He took up his appointment with effect 1st June 1983.

April 6-12 1997 marked the celebrations of the Golden Jubilee of the PSCCU under the theme, “50 Years Coping with Challenges and Changes.” At this time Mr. Joseph Bain was awarded for twenty-seven (27) years of unbroken service as Treasurer and several other long-serving members were also awarded.

The Credit Union Celebrated 60 years in 2007, with the theme “60 years of Continued Expansion, Creative Transition & the Latest Innovation. Activities during the celebration included:  “T-shirt” Day in which members of the credit union were asked to wear special anniversary t-shirts, Member appreciation day, Thanksgiving service and Reception.

1957:  the Government of Grenada passed the first Co-operative Ordinance and also set up the department of Co-operatives to regulate and protect Co-operative Development in Grenada. This Act gave credence to the movement and assisted in spreading the co-operative idea to other parts of the island.

View our archive of annual reports

See what job opportunities are available at Ariza

Stay up to date with what's happening at Ariza 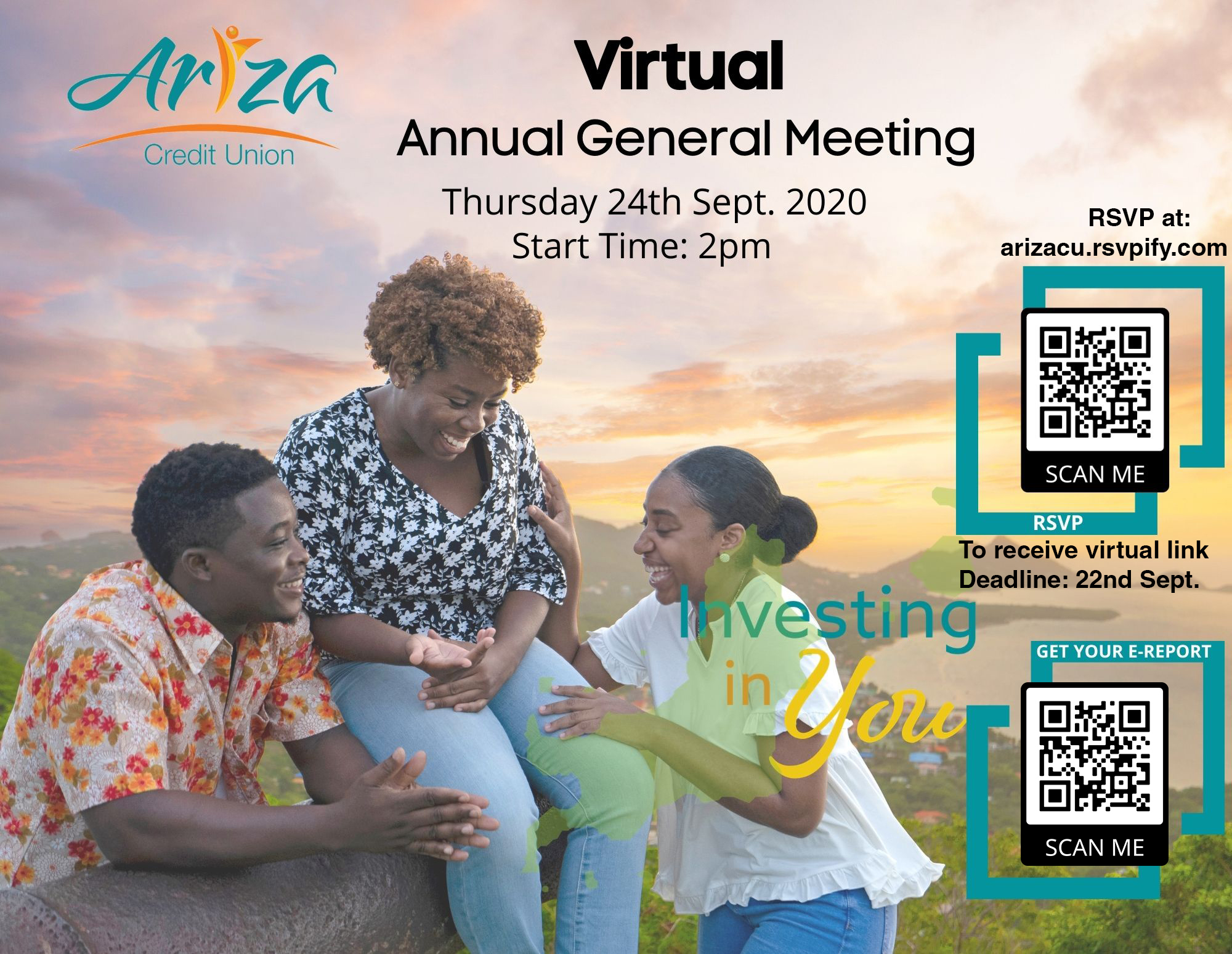